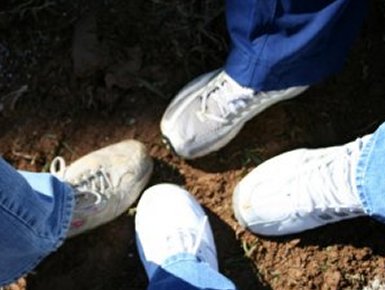 The four of us IN HERE TOGETHER - Spring Hill, Tennessee USA

Finding Group help or Starting One Yourself:

Looking for help as a Survivor of Suicide is just plain awkward.

First off, you have no idea where it would be, what it would look like, or how it could or would work.

Fortunately, there were two members in my church that had Suicide events in their lives. One male, John, (his wife’s Suicide occurred over 30 years earlier) and one female, Kathleen (with almost ten year’s head start from her husband’s Suicide.)

Oddly enough, the female was probably Rebecca’s closest confidant. We had known Kathleen in the range of 15 > 20 years at the time of my wife’s event. So while Kathleen was shocked when Rebecca ended her life, she was up to speed with her struggles.

Kathleen took it upon herself to march along the survivor path with me. Smart, persistent, aware, and incredibly driven. Had it not been for Kathleen and John, I have no thought as to where I would be today in constructing a new life.

For the first three months, Kathleen let me drift along with phone calls, visits, cooking lessons, and the like. I had just returned from a contract teaching job on the road when she announced that Wednesday night we were going “together” to a Survivor of Suicide meeting downtown. I did not take it seriously at first since it was the most bizarre idea I had ever heard of. I had no thoughts as to what that meant and certainly did not lean towards going, but remember, Kathleen was persistent.

So Wednesday, we headed for Life Crisis Service in Brentwood, Missouri, a city within the city of St. Louis. It was not a good event for me (one of my writing details the story), but she insisted that I go back (on my own) for a while. For whatever reason (and I cannot explain that), I complied. The longer I went, the more helpful it became. I continued for the next eight years weekly treks to SOS when I was not on the road.

That was the predominant catalyst that made the difference for me. This started in June of 1999, and I still have contact with a number of those I met that first night. I will only say it was a struggle at first, and I frequently convinced myself never to go back.

So without a Kathleen, how would you go about finding a group? The attendance thing has to be a personal commitment on your part.

If you are in the USA, the link below may help you quickly locate one. Of course, it covers only a few major cities.

The LCS group I became involved with had been started almost 20 years earlier by Jackie Kaiser, a lone survivor, with no facilitating experience. Just sheer determination to get help and give help to folks like her. Today SOS STL has been going for over four decades. I wish I could go back and visit with my friends there. We just keep up with text and email now, since I relocated 350 miles away.

There has to be a bunch of you (Jackie Kaiser – like) who could do what she did.

I have started three groups here in Middle Tennessee myself and moderated one for three years started by someone else. It is not rocket science. Think about it. I’ll get to work on outlining a plan as to how you can go about it with supplied aids. dJ

The SOS Directories for the USA and the state of Tennessee: