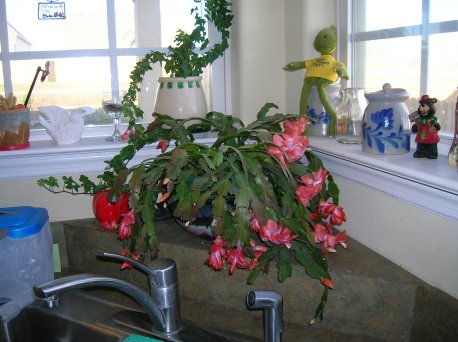 Thanks for Kathleen's Christmas Cactus  2005
About Finding Peace After Suicide:

For myself, there is no question that my wife ending her life is the most painful and enduring event in my life . . . No comparison or competing event.

I had heard about suicides in print and news broadcast . . . But it was always someone I did not know personally, and it always happened in some other place.

Even though I knew that such things occurred, it somehow never occurred to me that it would happen to my family.

Then I witnessed the aftermath of suicide with a friend’s family. But still, that was somewhere else and not in “my” family.

There is a vast difference in knowing about suicide and knowing it in a personal sense.

March 14th, 1999, changed all of that. It changed it all forever. In the snap of a finger, it was indelibly written into my personal history.

The aftermath brought on endless reminders and tended to haunt my every moment. Sort of like being in the wrong lane on a freeway. Knowing you are not in the proper lane, yet not seeing an opening to switch. The traffic is moving too fast to slow down. There is no shoulder to pull off on . . . And. . . There are NO exit signs.

I discovered I was stuck in “that suicide lane” as long as I lived.

I could pretend (for others observing me) that I was in good spirits. Or I could reveal the distraught turmoil inside.

In all of this, I learned we all have what I call a “Performance Mode.” Performance mode is all about pretending and pretending is arduous work. You spend so much emotional energy, acting a role that you can easily forget the essence of who you are.

All of that said if your life is to be reconstructed . . . You are the only one that can accomplish that. No one can do it for you. Sure, you can receive significant assistance in alternative ways from other people. But, in the end, you have to integrate what you learn into your soul.

Here is my assessment of external help:

It comes in different forms. There are those in the ministry, those in counseling, and therapy professions. There are alternative diversion activities, spiritual mediums, and on and on the list go. You notice I did not list the “I can do this myself method.” That is because I am unaware of any survivor self-generating a meaningful reconstruction. Yes, with gut instinct, you can happen on things that provide some relief. For the most part, these are typically short-lived, as are some of the alternatives listed above.

For me, the long-lasting reconstruction required me to change myself, my dreams, my plans, and this list goes on and on.

1st - I had to admit (in my heart of hearts as well as my conscious awareness) that this event had, in fact, occurred. Denial is sure a powerful force and especially when you are vulnerable. Some of you will learn that searching for an explanation only delays this admission. Without exception, we analyze all we know and discover (after the event.) For me, this is a lifelong endeavor. After a while, I was able to place “this search routine” on the back burner to simmer and not have it boil over.

3rd - I had to put the blame game to rest . . . Never to wake up again. I wrestled with this for years and found it the most difficult to implement. I just could not seem to break the “there is someone else at fault” other than who we have lost.” Over time I was able to say (to "the-me" inside) no matter how I want it to be, she did this unthinkable thing. She saw death as a solution to whatever it was she no longer wanted to face. She lost hope. Such a profound conclusion, yet some argue . . . So simple.

In essence, I had to surrender to the fact, “I am never going to figure this out.” No question, I stayed in that battle the longest, as irrecoverable life slipped away.

4th – The final step involved developing an attitude of forgiveness. Goodness . . . Forgiveness was missing from my repertoire all my life – so I could not just tweak the adjustments on something I never had.

When I was finally able to start the forgiveness process, I constructed a “forgiveness” letter. In some survivor groups, this is commonly referred to as a forgiveness or peace letter. Forgiveness was a topic that had been covered in more than one survivor group I participated. It sounds so simple, and yet I found it really HARD to do.

The process of getting your heart down on paper is not a spur of the moment burst of a few sentences. Continually refining this letter has been most beneficial.

Reading what you have written back to yourself brings out the facts, separating truth from dreams. This helped me ("the-me," inside) to come to terms with myself and our three dozen year relationship. I went over countless highs and lows at different times.

Out of this process, I was able to see there were many highs and very few lows. First was the process of admitting to areas I had failed the two of us. Then taking comfort in the areas I ("the-me" on the inside) had succeeded.

After more than a year, I was okay with what I had constructed. I still have a copy somewhere . . . the final completed in 2009 (yep, it took me a decade.) I put the original in a fire pit on the back patio. I watched it burn all by myself . . . So I did not have to pretend for anyone else.

I have since burned successive copies of this original in other situations, but I have never felt the need to rewrite the letter. I suppose I subscribe to the once and forever syndrome.

It took a while for me ("the-me" on the inside) to realize I had begun to carry on in a more peaceful mode of living. I was no longer just existing – as I had for so long. I started to get to sleep more easily. I ceased to wake up and ruminate on this event as I had for so long. It was not an instant transformation.

Solid reconstruction started that night by myself on the patio . . . and . . . the effects grew over time.

The one thing that has re-occurred over and over in my experience is that people find peace in ways that are just not within my acceptance boundaries. Some seem to have permanent results, while others are short-lived. I adjusted early in my reconstruction days to pay attention to other survivors. Over time you will be able to glean the permanent stuff from the momentary euphoric stuff.

I was getting help from an accomplished survivor (on this path nine years ahead of me.) I had known her for almost two decades. Kathleen was my most significant aid.

Thank you, Kathleen Leggett [and by the way, I still have your Christmas cactus and have begun to split and replant its offspring. I just gave the first one away last night.]