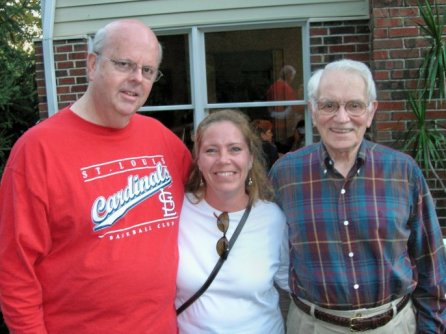 SOS partners in Creating My new Life, Bobbi and Paul -

About Recovery or New Creation:

My wife, Rebecca, exited our life over two decades ago.  So, I have had a lot of time to deal with all the emotional debris left behind.

I would learn over the first year or so that recovering the past life was unrealistic.

The only reasonable alternative was to sort thru the emotional debris left behind and structure a new me. There was little motivation in those early years. Frustration was lurking around every corner. Just getting to the next day was a struggle.

I am nearing my eighty first year presently and realize this process never ends. The circumstances of life just keep evolving.

Since her departure, there have been few highs and extreme lows. The more time passes, the more I wonder how I made it this far. Those first years are, now, a blur. Much of the embedded trauma has faded. But, those first stunning moments remain etched in my memory.

Although ill-prepared, from day one I was ready to go to war at the least provocation. I was unable to separate the essential things from trivial ones. Everything fell into one category for me, labeled "unimportant."

Bills did not get paid; insurance canceled, and the car never washed. The windshield would turn into a pasted disaster when the rains fell.

I would lash out (in my mind - at the smallest confrontation,) while pretending to be okay. I didn’t want to entertain any questions. I was angry and did not feel I should be. So the framework of a perpetual masquerade, was being birthed. I would make up so much, goodness; I no longer knew who I was. There is tremendous stress associated with pretending. In that process, you distort your character and are no longer yourself.

Anger did not appear instantly; it was a gradual process beginning with frustration. Some things could never be known, yet I felt obligated to explain things over and over. Frustration would boil over.

Anger is a behavior that often lurks out of sight, and can flare up instantly.  While frustration comes to all of us in one way or another. Some are better able to control it on the fly. Frustration tends to erupt in caustic outbursts, backlashes and can lead to you towards revenge. If you shift into revenge mode, you are out of control. These behaviors often surface in deaths of natural causes as well.

All of this can eat away at your soul and will lead to isolation and on to abandonment.

"That's the way Love Goes," to swipe a lyric from a Merle Haggard song. If you let anger take root in your heart, you will set up an impenetrable barrier in your mind. This barrier will be hard to dismantle since no one can reason with you in that state.

For me, I received plenty of suggestions from peers and professionals. I would politely nod and plow ahead, ignoring everyone's help.

I even went back to the Ph.D. counselor Rebecca, and I had seen in the months before her departure. I had a nasty attitude. I was probably thinking, this guy had no idea what he was doing; after all, Rebecca had taken her life.

Today, I think differently. The counselor knew well what he was trying to do. Sure, maybe there was a better way, or was my rejection factor set too high? Just something else you can never know.

From all the initial turmoil, I developed this attitude of thinking this life is an evil trip, and I don't want to be jerked around anymore. I stayed on this constant hunt for several years. I needed to know what had gone wrong, that would make Suicide, appear as a solution.

I still recall being confronted with this truth at one of my first SOS sessions. A participant, Paul, says to me, "Doug, you are never going to know." Well, that did not go over well with me. I am so glad I stuck it out with Paul all these years. Paul was correct, and I just refused to accept reality.

I began (it did not happen instantly) to relinquish the search for why by maybe the 3rd or 4th year down this path. Then during an SOS session, someone shared an analogy. The title was "The Cup."

The story went something like this. If you take a cup (of any size) and begin to fill it one drop at a time -- Well -- at a point in time and it will eventually fill slightly above the cup's lip. It was as though every drop wanted to stay together with those preceding. Finally, there would be a final drop that will cause the cup to overflow. This dilemma would appear -- was it the last drop or which one of the earlier drops was the cause.

You are forced, in time, to admit, "I don't have any way of knowing the answer to this question. And so it is with Suicide. I finally conceded. There was an unknowable number of drops collected in Rebecca's cup before it eventually overflowed.

Not ever knowing or understanding is a difficult pill to swallow - but is the reality, or so I see it now.

Even with all the adjustments in thinking I have made, there is still this propensity to search for "cause." I have different expectations now. Rebecca's Suicide, along with numerous other situations (including two pervious Suicides), has helped me in time to realize how incredibly jumbled human thinking and behavior is. We are all unique, and human nature is complicated and impossible to predict. Any explanation is full of all manner of assumptions – who can understand it?

Constructing my new LIFE could be looked at as the reverse of "The Cup" story. My cup currently retains many drops of help added by caring friends, books, seminars, and interactions with other survivors. My cup has not yet run over - but it continues to fill comfortably. I believe I have added many drops and added to other people's lives I have encountered. These drops vary so widely no one can prioritize them or follow their cascading effect. I am so thankful that my cup has filled enough to find PEACE in this field of trauma.

I encourage each of you to keep searching and get help where you can find it. Don't expect instant miracles, because those don't exist. Continue to control your expectations (in other words, don't expect too much too soon.) Don't instantly filter and discard everything as I did. That will keep you stuck.

It is necessary to consider things that may be outside your comfort system. Don't go running headlong down some tangent path, either. So many of these forms of relief or short-lived and will lead to backtracking. It would be best if everyone could identify their comfort zone.

Don't ignore everything your friends are saying. They do not understand, but neither do you at first. Be thankful for their attempts to help. There is something to be learned in both directions, so look for the benefits, not the flaws. After all these years of trying, I can only assemble fragments of what I have learned and now believe.

Give yourself time and learn to trust your instincts because, in time, that I believe lead me to PEACE. Adopting some else's opinion will leave you searching.