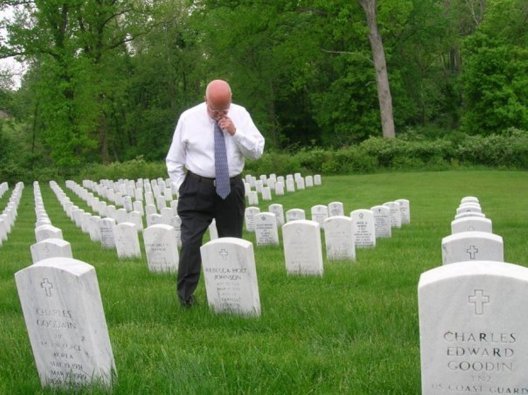 Jefferson Barracks National Cemetery on the Banks of the mighty Mississippi
Finding Out The "WHY" Question:

There is a natural curiosity regarding a suicide. Everyone wants to know the cause and the signs leading up to the event.

I have dealt with two suicide events and here are my thoughts on one. I realize that as a diverse population, we will never agree on what I will share. And, this is okay.

Moving to St. Louis (1977) we began to attend a new church. We became your-place – our-place friends with a couple, who had three grown, married kids and over time five grandchildren. For more than two decades, Kathleen and my wife, Rebecca became "joined at the hip" friends in church women’s ministry programs.

Kathleen’s husband, Joe, and I were not like “joined at the hip” but shared family backgrounds, growing up Houston, Texas, and other interests. Over the course of fifteen years, we did a lot together like whacking golf-balls at the driving range, painting, and maintenance work on the church facilities. We were cooks and clean-up partners for our Saturday morning Men’s group.

Joe experienced a stroke shortly after turning sixty-five. At this point, I became one of the family “go-to assistant." The stroke had passed the five-year mark, so we knew each other well, or so I thought.

Joe and Kathleen had just returned from a family vacation. All their children and grandchildren had gathered for a week at a cabin in Colorado. I hung up from a lengthy review of the trip. Less than three hours later the phone rings and Kathleen screams, Joe has shot himself. I have reflected back on that conversation endless times . . . Not the slightest clue, just one of our regular calls.

I don’t care who you are or how many letters follow your name. No one, including my wife, could ever explain this suicide thing with a single cause. Whether they leave a note or not, makes no difference – think about it. It would take a publication the size of an encyclopedia to even begin. That is just not going to happen.

It is ever so natural for survivors to latch onto a significant issue and attempt to store the problem away. While this approach seems to work for some survivors, it would just not work for me. It took a while for this whole suicide issue to sink-in and to regain some emotional balance.

I was curious about the situation with Joe, but I never talked to Kathleen about it until after Rebecca’s, my wife's, death.  I learned a lot of stuff I did not know . . . But nothing that would render a single reason to die. Suicide is way more complicated than that.  In the end, I will forever be indebted to Kathleen for all her tutoring.

Kathleen died at home alone in 2005 of a heart attack. The kitchen was cleaned up; she apparently sat down to watch the evening news. She was discovered there in her chair the next afternoon, by her daughter and son-in-law.  Kathleen deserved PEACE after all the trauma she had endured.

JUST A TIP FROM MY EXPERIENCE

Those that or outside our circle think of a suicide event like a TV show . . . i.e., CSI (an American mystery series.)  Just ask a few questions and from that determine what “the cause” is.  Within the hour the mystery is solved.  After being at it (trying to get a grip on the whole suicide thing) all these years, I have come to believe it is a way more complex issue.

I existed in the “I will find the cause state - and not give-up short of the goal” for several years.  Now I realize the actual cause can never be validated, so we are left to accept the fact - we can never really know.

It took a lot of years to find PEACE.  I had to accept the fact “I can never know." For years, I thought, there was “a single cause” for every situation. I no longer think that way.

Changing my thinking, in this regard, has relaxed me enough to say “I don’t know.” Because that is the truth and it avoids endless discussions, theories, and analysis all of which involve assumptions. It is beneficial to learn to avoid them. They take you nowhere, and versions of your details will come back to haunt you as time moves along. They should not - but that IS the way it works.

Your original assessment and subsequent version will be passed along, with content adjustments - person to person, and the results come back WILDLY off the center line.

I always drop back to the analogy of “the cup.” It fills a drop at a time and finally runs over. Is there one drop responsible? Well no, it is the results of a gazillion drops that proceeded the one that causes the cup to run over - so not just “one.”

Again, I would avoid “the cause thinking." It is frustrating and leads to anxiety, and anger and resentment, and revenge and in the end, you are right where you started.